I finally got my alt (who I'm not going to name for obvious reasons) set up and into a ship scanning venture so I decided I'd test it out and do a little suicide gank. After a little bit of looking around I found a target, a small fleet of miners, specificity a Retriever. I got the Venture up nice and close, gave a few scans to the Retriever which I found to have absolutely no tank whatsoever, which is interesting, like holy crap, how hard is it to slap a few fucking mods on a barge..

I undocked Dexter in a Catalyst and warped to my alt at the Catalyst's optimal and pre-heated my two groups of guns, I am using two groups of guns because of my shitty fitting skills, so don't ask questions. I actually forgot to set my safety to red because I have multiple retardations but an earlier bump from my Venture saved the day, as soon as I got my safety sorted I fucked shit up and the Rettie popped in a matter of seconds, I didn't go for the pod because I can't afford to lose the Sec-status at the moment. 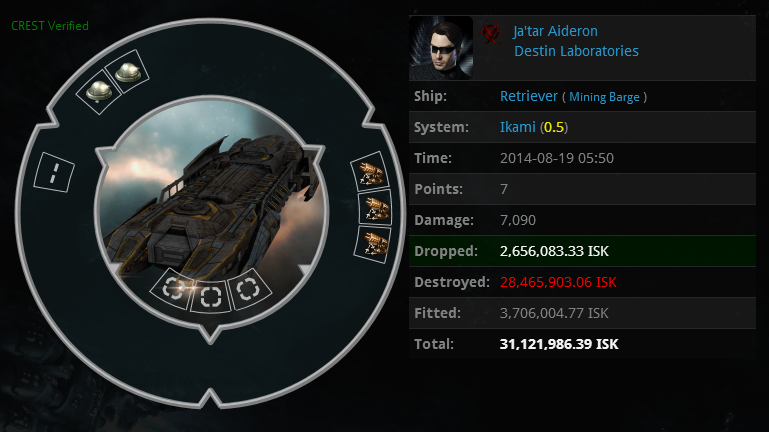 I quickly swapped back to my alt who we shall call Riddick, and scooped loot. I made around 6,000,000 ISK from the loot which wasn't a profit but who gives a fuck, this haughty miner scum attempted to mine without a Permit! As I am no CODE Agent I was unable to assist him in that matter, but maybe it will make the arrogant bear think twice about mining without a permit.

Kill of the week goes to Cyclo Hexanol for his amazing effort under duress to take down this Special Edition Mammoth. Cyclo truly is a master of unfair PvP.