Suicide ganking has always held a soft spot in my heart and today I decided I'd have another crack at it after a long hiatus from the 'scene' after some deliberation I headed to a system and got a fairly clean gank off on a Rettie (see previous blog post) which really got me going again - I was eager to gank more of these young, feeble children of the veldspar.

As eager as I was, nothing excuses my next embarrassing fuck up. I had found another Rettie and scanned it down, it had some tank but nothing that my current 600 DPS couldn't chew through, I set up a warp in and got straight to work, overheated and just as I broke armour CONCORD slapped me on my ass and told me to move on, rudely. I was a bit confused because I knew I had 13 Seconds in a 0.5 System, after checking around some shit I realised I just ganked a Rettie in the same belt as my last gank, CONCORD were already sitting in the belt before I started.

Let this be a lesson to anyone that is stupid enough to read my shitty blog, check your surroundings and always be aware, you never know what might be lying around.

As embarrassed as I was I didn't want to end the night on a sour note so I jumped in another Catalyst and started scouting the belts for more targets - this time I checked for CONCORD as well.. after a while I hopped system and found another Retriever, I suited up scanned that bitch down and found his extremely powerful tank.. a civilian shield booster.

I warped Dexter in at 0 and started pounding the Rettie. Remember that extremely powerful tank I mentioned earlier? The pilot didn't touch it - Miners, don't fit active tanks if you're just gonna AFK. Soon enough the Rettie was crushed into dust, as was the unfortunate miner's pod.

Death to the miner. 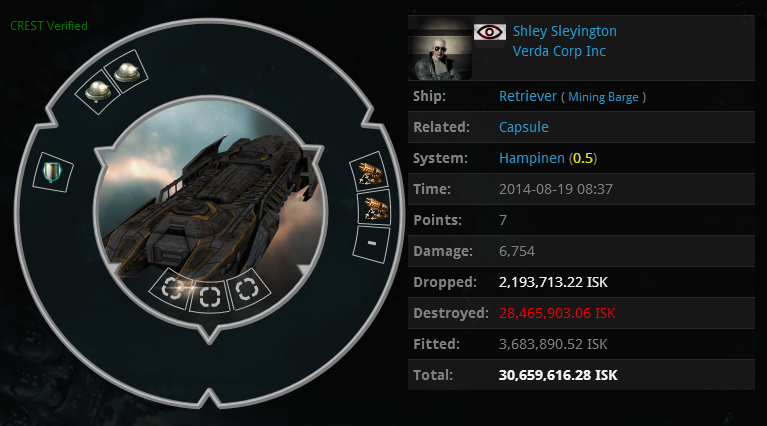